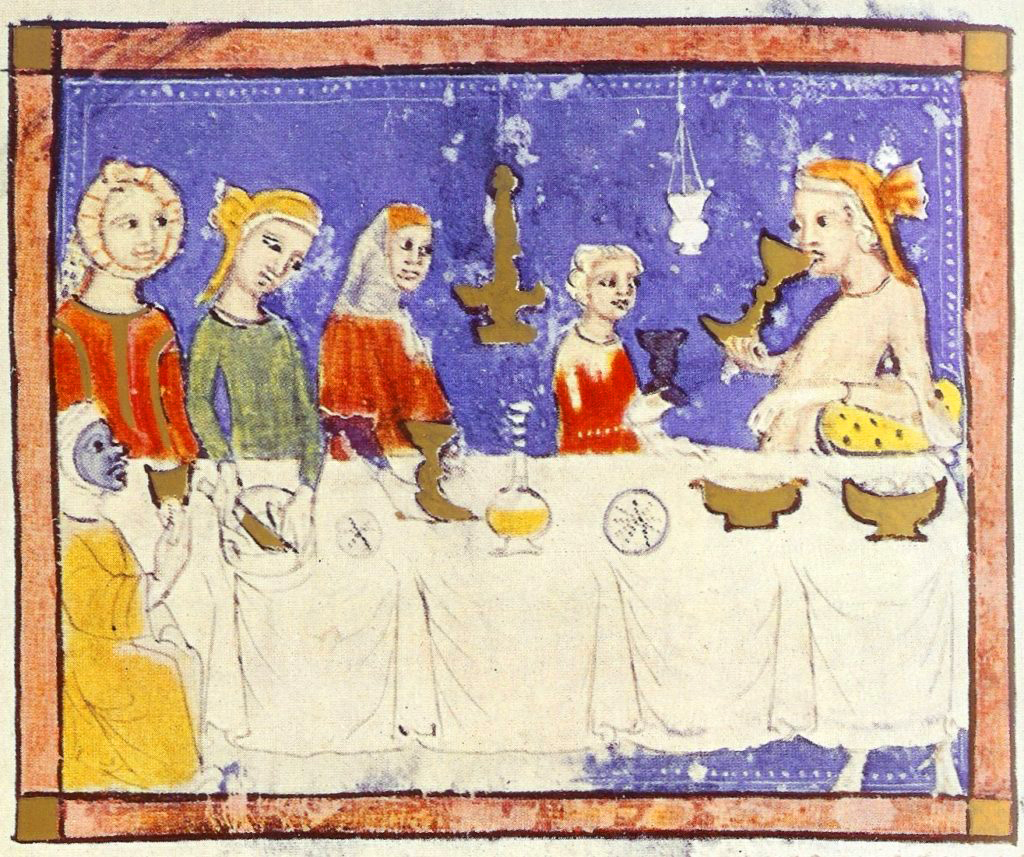 A family sits down to the Seder in the Sarajevo Haggadah.
(Courtesy of National Museum of Bosnia and Herzegovinia.)
Layers of Meaning
In less than a month, we will celebrate Pesach. As the People of the Book, Jews celebrate their holidays by reading books that relate to the respective celebratory events. The Haggadah (literally, The Telling), read on Pesach, is the single most widely read Jewish book. The Haggadah is a tale with several historical layers, inspired by the Exodus from Egypt. The first standalone Haggadah appeared around 1000 CE, comprised of biblical texts, commentaries, liturgical pieces, and editorials written by the Rabbis. The Rabbis added a pedagogical aspect to tell the story to your child, as well as to get children involved by prompting them to ask questions to convey the memory.    There are over 3,000 Haggadot published; each one is different from the next, reflecting social, political, religious, and sociological perspectives, not to mention Haggadot written in many languages. Like a small gift, wrapped inside multiple larger boxes, each Haggadah retains the kernel of the event meant to be memorialized, adding extra wrappings that advance a particular agenda. The text that one reads is not only literal, but a subtext of the meaning given by every generation in the context of the tradition.    Another layer of meaning is the history of certain Haggadot, like the Illuminated Haggadot, from the time of their commission to their subsequent journeys and their final destinations. A case in point is the Sarajevo Haggadah, written entirely in Hebrew, housed today in the city of Sarajevo at the National Museum of Bosnia and Herzegovina. I visited Sarajevo, which some call the Jerusalem of the Balkans, in 2008 and had the opportunity to see this remarkable Haggadah with its original wine stains. Commissioned by a Jewish family for their daughter’s wedding, the Haggadah was made in Barcelona around 1350, brought to Italy after the expulsion of the Jews from Spain, and reappeared in Sarajevo in 1894, where the National Museum purchased it from a Sephardic family. The Haggadah survived the Second World War and the bombardment of Sarajevo in 1992. Today the Sarajevo Haggadah is accessible to the public at the National Museum of Bosnia and Herzegovina, adding yet another layer to the kernelled story of the Exodus.
Dr. Alicia Gejman, Curriculum Specialist